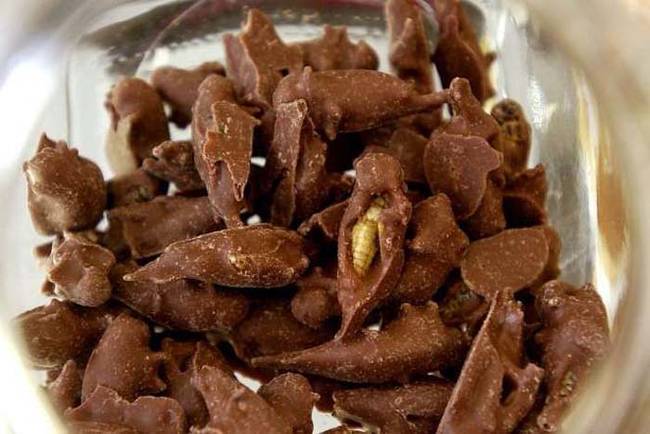 Every year the U.S. recognizes National Chocolate-Covered Insect Day in October and thousands of Americans participate by hosting a Bug Club Party. Bug Club parties offer party goers the once-in-a-lifetime opportunity to proclaim, “I ATE A BUG!” because the only snacks on the menu include chocolate covered insects like crickets and super mealworms!

If you think a bug club party sounds crazy, gross or weird….you might be surprised to learn how many countries consider bugs to be delicious delicacies! In fact, the United Nations said that there are more than 1,400 insect species eaten by around 300 ethnic groups in 113 countries worldwide.

Purdue University hosts a world-famous Bug Bowl in April each year, and over 30,000 people attend. One of their most popular food items are the chocolate-covered crickets on a stick.

Want to host a bug party? There are many ways to cook crickets and super mealworms at home. One of the most popular methods, of course, is to douse these edible insects in chocolate! If you’ve never tried them, they taste similar to chocolate-covered popcorn or pretzels.

Those who are daring enough to cook them at home can try this recipe:

Insects are rather small. To serve a decent amount, you’ll need about 500 LIVE superworms, LIVE mealworms and/or 500 LIVE crickets, which (of course) you can also order online from Fluker’s.

Your chocolate covered insects will store for up to 3 weeks in the refrigerator in an air-tight container, or until your bug party guests arrive!